David's birthday last week and we were going to be in NY so I scouted around for something that would interest him. Turned out that there was the perfect event..... an audiovisual installation by Brian Eno and then a related lecture by him at the Great Hall at Cooper Union a few days later.

Problem was, I was late to the party and the lecture was already sold out. So for the first time ever I succumbed and responded to an online ad for tickets at outrageously inflated rates. They arrived overnight in a plain wrapper with no accompanying paperwork, looking as suspicious as can be, but turned out to be legit. (Thank goodness, or it would have been embarrassing at the door)  Albeit 5x original price, it was worth every penny. The installation was very interesting but it added a lot to the experience to hear him explain it all.

296 original projected light works,  patterns and colors overlaid randomly within a grid, several at a time, very slowly fading in and out in different combinations. Eno's gentle Ambient music is also arbitrarily generated so you never see and hear the same image. 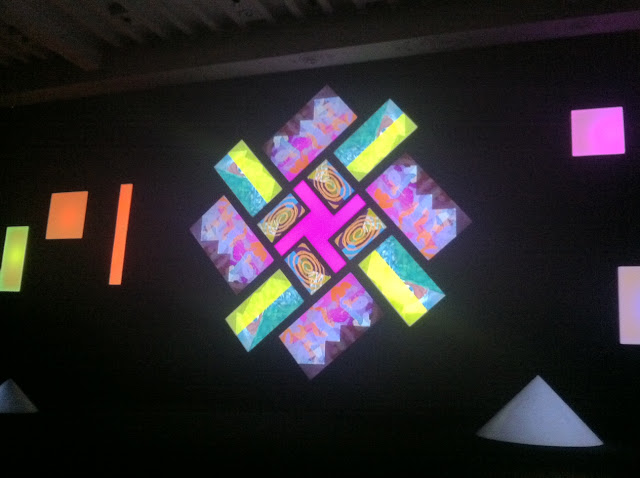 We entered a large, dark warehouse space. There were a few velvet sofas to sit on, a giant projection on the wall and some cones on the floor. It had a rather somber, church like atmosphere. 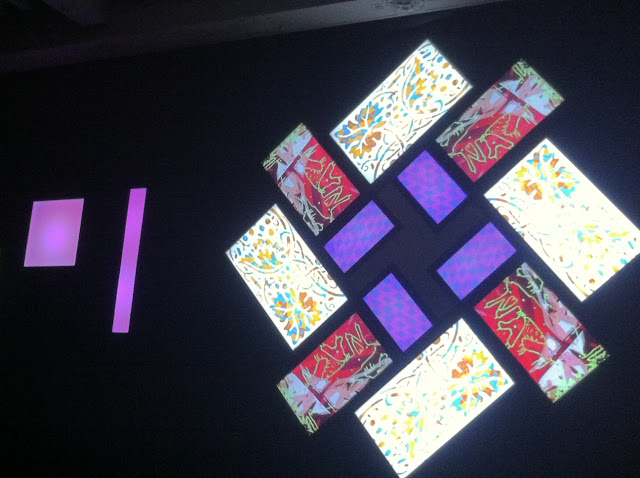 It's so gradual I didn't notice the image was changing at first and I thought it was all too minimalist for my jumpy brain to tolerate for long, but gradually I relaxed and began to really enjoy it. We sat down and stayed half an hour or so and as we left I noticed a guy on the sofa behind us was fast asleep and snoring. Eno said over the years he's observed this behavior many times, people will come in and scope it out, maybe with some skepticism, then get interested enough to sit down, then fall fast asleep. (This being a good thing!)

In Hove, UK, a new private hospital has built a permanent small relaxation room showing the installation for patients undergoing cancer treatment to "think, take stock and relax", the thought being that it helps lower anxiety levels, blood pressure and so on. A surgeon commissioned it after noticing his very hyper mother calm down when seeing 77 Million Paintings at a festival. Eno also mentioned that over the years many women have told him they chose his music to give birth to. 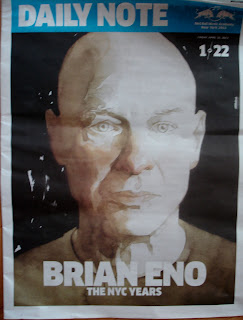 We were lucky with the lecture. He said people always want to hear about the past but he prefers to talk about the present and the future. However, he was making an exception in this case and putting this work into the larger context. So we were treated to a very entertaining couple of hours with a slideshow of his life starting right back at childhood, showing many of his early influences (I took note of Mondrian and Terry Riley's IN C as I could see both of those in this work) and the musical and artistic collaborations he's been involved in over the years. A lot of candid, behind the scenes shots of him working with Roxy Music, Fripp, David Byrne, Bowie, U2 etc. And artwork going back to his first prize winning drawing as a child in Woodbridge, Suffolk, through art school in the '70s, to today.

He explained in some detail his creative thought processes and showed slides of how, practically, he sets about putting things into action. As an endorsement of what he espoused..... the idea that you can hold 2 opposing thoughts in your head at once about art,  A/ "that's the most amazing thing I've ever seen in my life" and B/ "I could do that!"....... we both came away very inspired to get on with life and just DO things instead of sitting around endlessly thinking about it.

photos.... Fanpop.com, David's illicit Cooper Union shot, a few of the many, many we took in midtown, show handout.